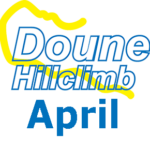 The April Doune National B event is open to competitors who hold a National B licence or higher and are members of any Motor Club that is part of the Scottish Association of Car Clubs, Scottish Sprint, Hillclimb and Speed Championship, Lothian car Club or invited clubs. Membership or Registration Cards must be shown.

September DOUNE TIMED RUNS
On both days, first timed runs will commence at a time to be announced by the Clerk of the course on the day.