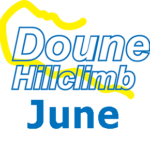 The June & September Doune National B event is open to competitors who only hold a National B licence and are members of any Motor Club that is part of the Scottish Association of Car Clubs, Scottish Sprint, Hillclimb and Speed Championship, Lothian car Club or invited clubs. Membership or Registration Cards must be shown.

JUNE  SATURDAY PRACTICE
Saturday starts 0900 hrs Competitors must practice on Saturday to be eligible to compete on the Sunday following and will be expected to make a practice run and if time permits may make further practice runs. Further practice runs are at the discretion of the Clerk of the Course

JUNE SUNDAY PRACTICE
It is hoped to have limited practice commencing at 0900 hrs but this will only be available to competitors who have completed their Saturday practice or
attempted to do so. Sunday practice maybe curtailed to suit prevailing conditions.

JUNE DOUNE TIMED RUNS
First timed runs will commence on Sunday at a time to be announced by the Clerk of the course on the day.